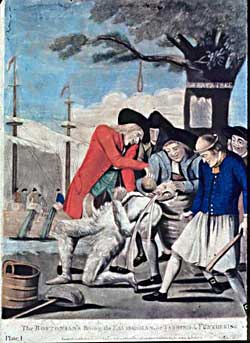 Did a 1 cent stamp launch the American Revolution?

"Such another Experiment as the Stamp-Act wou'd produce a general Revolt in America." - George Mason, 1766.

In March 1765, the British Parliament announced a stamp tax. Beginning that November, American colonists would be charged taxes on a variety of printed items, including newspapers, wills, and playing cards. In most cases, the tax would be small, beginning at a half-penny. The response was surprising, at least to the men in Britain who had designed and approved the tax. American colonists, having recently fought in support of Britain, rose up in protest against the tax before it went into effect. The protests began with petitions, led to refusals to pay the tax, and eventually to property damage and harassment of officials. The Stamp Act protests established a pattern of action against British officials that would, in some cases, involve physical assault, as shown in the image to the right. We will take a closer look at this and other images and evidence in exercises that follow. But consider these questions for now. What would cause Americans to act in this manner? Was the tax that expensive? Or were other issues at play? But watch out. Stamp agents are on their way and Sons of Liberty are on the prowl!

Activity 1: Why the Stamp Act? And why all the fuss? 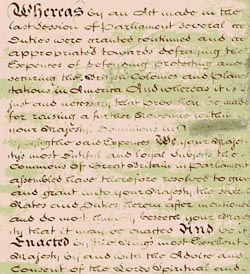 Historians begin with a question or set of questions. They use these questions to examine evidence or sources in order to develop and support their arguments. This exercise asks you to examine a group of sources against a series of questions given below. Be sure that you create a set of reading notes for your responses. You will need them later in this module.

Use the discussion board for your response.

Historians share their ideas with each other in a way that allows for a free exchange of interpretations. This exercise asks you to do this with your classmates using the discussion board assigned by your instructor.

As assigned by the instructor. 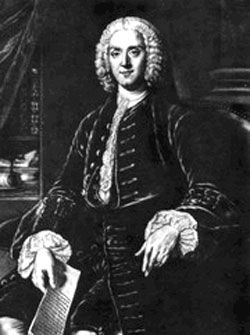 First Lord of the Treasury and later
Prime Minister

"Mr. Grenville strongly urg'd not only the power
but the right of Parliament to tax the colonys,
and hop'd in Gods Name... that none would
dare dispute their Sovereignty."
- Edward Monatague

Historians draw their evidence from a variety of sources, including documents, vital records (such as birth certificates), images and artifacts (things people make and use). This exercise asks you to draw on a combination of documentary and visual evidence. Examine the evidence against the suggest questions and make notes for later use.

The protest in ideas and words

Read two of the following documents. Which specific words, phrases, or ideas appear particularly important or useful in communicating an idea? Who was the audience for the documents you selected.

The protest in action

Read two of the following reports of the protests. How did protests work? Who attended? Who or what was targeted? What was done?

The protest in images

Examine the following images. What do they add to the documentary evidence above?

Use the discussion board for your response.

Create your own crowd action

History can be examined by recreating events in a realistic context. This exercise asks you to do your own recreation by drawing on what you have already learned from your examination and analysis of the evidence and by looking at models drawn from the period we are investigating.

Examine the following evidence and consider what they tell you about the British and patriot responses to the repeal or ending of the Stamp Act.

“Upon the whole, I will beg leave to tell the House what is really my opinion. It is, that the Stamp Act be repealed absolutely, totally, and immediately; that the reason for the repeal should be assigned, because it was founded on an erroneous principle. At the same time, let the sovereign authority of this country over the colonies be asserted in as strong terms as can be devised, and be made to extend every point of legislation whatsoever: that we may bind their trade, confine their manufactures, and exercise every power whatsoever - except that of taking money out of their pockets without their consent.”
From William Pitt's Speech to Parliament on Repeal of the Stamp Act
Full text of Pitt's Speech (click on context for information on the speech.) 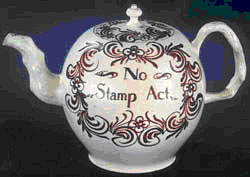 Submit your response as directed by your instructor. But consider how you might construct and present your response to look as much like it would have in 1765.

“The Bostonians paying the excise-man, or tarring and feathering,” Philip Dawe [?], 1774. This tinted engraving depicts the tarring and feathering of John Malcolm, a Commissioner of Customs, by the Sons of Liberty a little less than a decade after the Stamp Act protests. It also appeared in other versions

The image had multiple meanings for contemporaries. The read it as a larger message, but also took note of the specific symbols and phrases contained within the image. These symbols and phrases connected to ideas and events that took place during the protests that lead up to the moment of Malcolm's punishment. 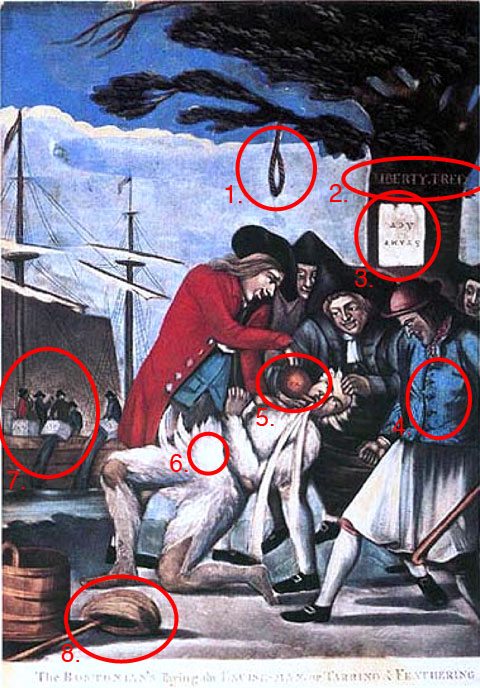 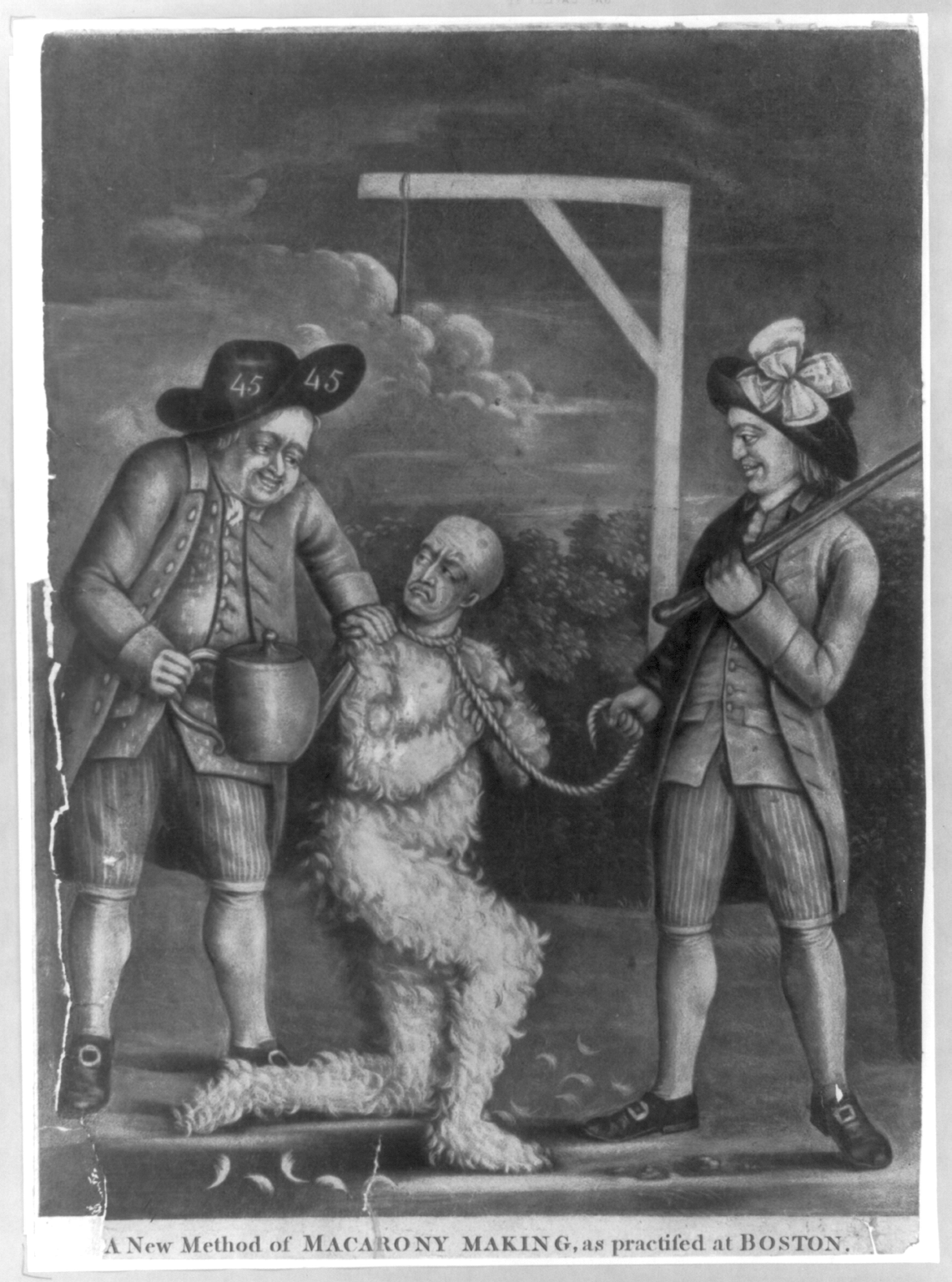 The module as a whole requires more time than most instructors can allow for this particular topic. For this reason the module presents information, sources, questions and assignments as individual segments to be used by instructors as needed in their courses.

For example, you may choose to substitute on-line and in-class discussions for writing assignments, or assign writing where the module calls for discussion. You may also design your own assignments in conjunction with any segment or combination of segments presented in the module. A third alternative would be to have individuals or groups of students work on specific segments and offer their conclusions as class presentations.

The module also lends itself to a variety of additional assignments that ask students to complete additional research or to draw on their creative abilities. Some suggested examples include:

British Politics and the Stamp Act Crisis: The First Phase of the American Revolution, 1763-1767. Clarendon Press, 1975.

Weslager, C. A. The Stamp Act Congress: With an Exact Copy of the Complete Journal. University of Delaware Press, 1976.

From Revolution to Reconstruction

Spy Letters of the American Revolution

The American Revolution: National Discussions of Our Revolutionary Origins

The Avalon Project: A Documentary History of the American Revolution

The National Archives: Images of the American Revolution