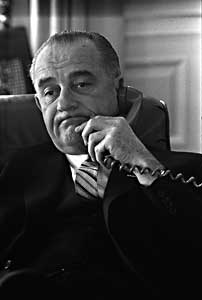 The unit consists of four tracks. The first three focus on separate content areas from the 1960s--foreign policy, civil rights, and electoral politics. Each of these three tracks is structured similarly and contains about the same amount of work, allowing the instructor to choose which track best fits his or her course. The fourth track examines events of the 1960s in the context of the Cold War, and thus reverses the order of the previous three tracks (here the documents are first, and the tapes second). By clicking on the link for the selected track, a series of separate pages appear that can be presented to the students, with the assignments for only that option. Instructors should not give access to this entire page to students, since it has tended to overwhelm them in the past.

During his 5-year tenure as president, Lyndon Johnson secretly recorded around 642 hours of phone conversations and (in 1968) cabinet meetings. The bulk of the available tapes come from 1964 and 1965, the years of his greatest political and legislative triumphs. This unit uses clips from these recordings to glimpse inside the White House at a time when LBJ made some of his key decisions--regarding civil rights politics and policy; Vietnam and foreign affairs; and his 1964 reelection bid.

For a sense of how the MFDP issue vexed Johnson, listen to the clips below (each is under 2 minutes), four excerpts of a conversation between Johnson and Georgia governor Carl Sanders, perhaps the leading Southern moderate officeholder of 1964. As the reading above noted, Johnson had arranged for a "compromise" under which the segregated Mississippi regular delegation would be seated, and two members of the MFDP would be seated as "honorary" at-large delegates. Speaking for the MFPD, Fannie Lou Hamer announced that the MFDP didn't come to the convention site in Atlantic City (the "original Bay of Pigs," said one press wag) to "sit at the back of the bus." But even the moderate Sanders thought that LBJ had gone too far in the compromise.

What are the act's most important features? How did the act's authors hope to use the law to achieve equal rights for all? What sorts of problems were not addressed or anticipated by the act?

In terms of historical skills, how does analyzing a government document differ from analyzing telephone calls between key policymakers? What are the strengths and weaknesses of each as a historical source?

Listen to President Johnson's complete conversation with Sanders, along with this conversation between President Kennedy and Mississippi governor Ross Barnett during the crisis over the admission of an African-American, James Meredith, to the University of Mississippi.

Compare and contrast the approaches of Kennedy and Johnson to the issue of civil rights. Be sure to consider the following issues:

For a sense of how Johnson struggled with the Vietnam policy that he inherited from Kennedy, listen to the clips below (each of which is less than 3 minutes), from a conversation between the President and Secretary of Defense Robert McNamara on March 2, 1964. Seeking to counter press criticism of the administration's Vietnam policy, the President pushed McNamara for a clearer sense of the U.S. justification for involvement in the war. Keep in mind that, by this time, Johnson had already been President for more than three months, and the number of U.S. troops in South Vietnam had risen to more than 20,000.

Lyndon Johnson was someone who preferred doing business over the telephone, and who believed that formal meetings often were a waste of time. In contrast to his lobbying members of Congress, however, on foreign policy issues he had little choice but to work through the established bureaucracy, at least to some degree. The following documents from the Foreign Relations of the United States series detail U.S. policy toward Vietnam in the month following Johnson's March conversation with Secretary of Defense McNamara. You should read documents #74, 81, 84, and 100.

What are the central features of the administration's policy toward Vietnam? How much leverage did the President possess compared to other key policymakers? Do you see any key "turning points" in the development of US policy?

How does analyzing a government document differ from analyzing telephone calls between key policymakers? What are the strengths and weaknesses of each as a historical source?

Listen to President Johnson's complete conversation with McNamara, along with this discussion between the President and National Security Adviser McGeorge Bundy about Vietnam from November 3, 1964. In what ways had the administration's approach to Vietnam changed between March and November 1964? What do you see as the one or two central principles of LBJ's policy? Be sure to consider the following issues:

Discussion between the President and National Security Adviser McGeorge Bundy about Vietnam from November 3, 1964

For a sense of how Johnson conceived of the "frontlash," listen to these conversations--clips from August and September 1964 calls between the President and aide Bill Moyers.

The 1964 presidential campaign was the first in which the majority of commercials run by the two candidates--Johnson and Arizona senator Barry Goldwater--were negative; and the race produced the most famous attack ad in American history, Johnson's "daisy ad," which featured a countdown to a nuclear explosion superimposed over a little girl picking the petals off a daisy, with the implication that Goldwater would start a nuclear war if elected President. Watch these 20 television commercials from the campaign.

To what extent did Johnson accomplish the goals he outlined in his conversations with Moyers and Reedy? What message did Goldwater hope to convey, and was he successful in doing so?

How should we analyzea source like TV ads, which rely on visual messages as much as the text or the sound? What did you consider the most effective ad of the 20? Why?

Listen to this remarkable (lengthy) October 1964 conversation between Johnson and his chief aide, Walter Jenkins, in which the President, functioning as his own campaign manager, surveyed the state of the race against Goldwater, discussed political tactics, and outlined his vision for the future political state of the country. Historians (and contemporary political commentators) often remark on the contradictions between the necessities of campaigning for office and the more idealistic vision of public policy held by politicians. Compare and contrast Johnson's political goals with the tactics that he is willing to pursue. Be sure to consider the following issues:

This timeline gives a sense of some of the key events in US policy toward the Cold War, 1946-1963.

In 1947, the journalist and commentator Walter Lippmann penned an article describing the developing US-USSR confrontation as a "Cold War." The term came to describe the state of superpower relations for the next four decades. These maps portray how Europe and the rest of the world became divided into two camps.

To what extent did these three documents envision a similar threat posed by the Soviet Union? Did Eisenhower's call for taking into account the economic limitations of the United States really differ from Truman's general approach?

Do you notice any difference between the X Article--which was written for public consumption--and the two NSC documents, which were classified?

After the construction of the Berlin Wall in 1961, the Cold War in Europe stabilized. The superpowers' focus turned to Latin American and Asian affairs. In 1962, the U.S. discovery of a planned Soviet nuclear missile base in Cuba prompted the Cuban Missile Crisis; after 13 days of tension, the Soviets pulled out their missiles. Forcefulness proved a less appropriate response to events in Vietnam. U.S. troop levels in the Southeast Asian country dramatically increased after John Kennedy's assassination in 1963.

How did the two Democratic administrations of the 1960s address the emerging problem of Vietnam. Compare and contrast the recording of this meeting on Vietnam between President Kennedy and his key national security advisors with President Johnson's March 1964 conversation with Defense Secretary Robert McNamara. Be sure to consider the following issues:

Presidential biographies are among the most common, and popular, type of political history, and presidential historians have to balance the sometimes competing needs of presenting a faithful portrayal of the President's personal life with an understanding of his public policies. Striking this balance can be especially difficult when dealing with the tapes, since the recording systems often picked up unusual and perhaps atypical moments in a President's life that under any other circumstances never would have been retained.

How much attention should historians devote to the private traits of 1960s chief executives? Keep this question in mind when listening to the following two calls: the first, between Lyndon Johnson and Joseph Haggar, in which the President ordered some slacks, giving some very specific tailoring advice; the second, between Richard Nixon and the late New York senator Daniel Patrick Moynihan, at the time US ambassador to the UN, in which Nixon discussed his theories on the capacities of different races for effective governance.