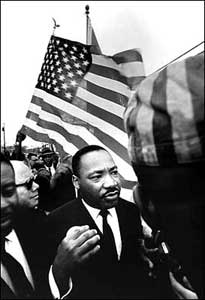 The Black Freedom Movement, like other historical moments, events and eras, is continually undergoing a process of interpretation and reinterpretation. As historians discover new primary sources, uncover new angles of African American organizing traditions, and reexamine old evidence, they have rethought the timeline, the trajectory, and the nature of the Black Freedom Movement. Their views about when and why the movement began, the role of women, the issues that preoccupied activists, as well as what gave the movement its strength, are increasingly being seen in a new light. Much of this new scholarship is built upon a traditional understanding of the Civil Rights Movements which follows:

The Civil Rights Movement emerged in the mid-1950s with a series of boycotts against racially segregated facilities in the South, sparked by the landmark Supreme Court decision, Brown v. Board of Education, which outlawed segregation in the public schools. The most well known boycott was the 1955 Montgomery Bus Boycott in Alabama, led by figures such as Martin Luther King, Jr. and Rosa Parks. The boycott lasted over a year and successfully desegregated city buses in Montgomery. Demonstrations for equal access to public facilities and to the ballot multiplied rapidly throughout the South and included public marches, sit-ins, and other displays of nonviolent direct action. The protests reached a peak in the early 1960s, resulting in the passage of the Civil Rights Act of 1964 and the Voting Rights Act of 1965. While the passage of the Civil Rights Act and Voting Rights Act were watershed moments in postwar US history, for participants in the movement, they also raised troubling questions about the nature of racial oppression. The most frequently asked question was how fundamentally would the lives of African Americans be transformed by the passage of these acts? Other activists became skeptical of government intentions and the strategy of nonviolence, particularly in light of the relentless violence directed at black activists and the lack of federal intervention. They turned to armed self-defense and, in some cases, violence. Some advocates of Black Power became wary of white support and involvement in the movement and called for black solidarity and nationalism. Others began to draw attention to the presence of rampant racism in northern communities, addressing in particular residential segregation, the lack of employment opportunities, and patterns of police harassment. The transformation the black freedom movement underwent in the mid-1960s redirected and reshaped its political direction. As activists began to address racism in northern communities, adopt more militant strategies, target poverty, and increasingly articulate a strident nationalism, the movement fractured and lost momentum. With the assassination of Martin Luther King, Jr. in 1968, the movement essentially collapsed.

This standard narrative presents a linear view of the civil rights movement, using King and other national, male leaders as the defining figures. It focuses primarily on the South, the strategy of nonviolence and goal of integration. It minimizes local, grass roots efforts and activists organizing in other parts of the country. It truncates the timeline of the movement by not taking into account those who organized prior to the Montgomery Bus Boycott as well as those who continued to be active after King's assassination. It glosses over competing views among activists, writing out of the history those who advocated self-defense and those who pushed for economic change. And it downplays the role of women in the struggle for social change. Examining the following primary sources documents will help you shed light on new interpretations of the black freedom movement.

You will be curating a museum exhibit on the story of the Civil Rights Movement based on your reading and analysis of several visual and textual documents from the period. Your exhibit can take the form of a Power Point presentation, a web page or a poster board.

Students should familiarize themselves with a standard account of the civil rights movement by reading their textbook chapter, reading the overview above, or viewing a website such as the timeline on https://www.sitinmovement.org/history/america-civil-rights-timeline.asp – go to the site and scroll down the page to Timeline.

Divide into groups of 4 or 5. Please examine the following documents.

Some of the questions to take into consideration as you look at the photographs:

Some of the questions to think about as you read the text documents:

Write a short label for each of your documents (one paragraph). Take into account the dates, locations, as well as content of the photographs and documents.

As a group, select a title for your overall exhibit. Organize your documents in a meaningful order. Compose a general wall label (2-3 paragraphs) that explains the complexity of the black freedom movement in the post-war period.

Some issues you might want to consider are: patriotism, internationalism, feminism, gender, poverty/economics, civil rights, self-defense, leadership, nationalism, and integrationism. Remember the point here is to present a more complex view of the struggle for black freedom, rather than a simple linear model. How do these primary sources fit with the standard account of the civil rights movement that you read about? Can a single narrative explain the movement's evolution?

You may have to do additional research in order to gather enough information to contextualize each document.

Take into account the primary sources you have examined and rewrite the section of your textbook that describes the civil rights movement. Give a title to the section and, where appropriate, reference primary source douments. 4-5 pages.

This assignment is designed to introduce students to the traditional narrative of the civil rights movement—that begins with the 1954 Brown v. Board of Education decision and ends with the assassination of Martin Luther King, Jr. in 1968—and then present to them primary sources that complicate that narrative. Depending on the amount of time available, instructors can familiarize students with the more conventional view of the civil rights movement by having students read a textbook chapter or sending them to a website as homework, or by leading a discussion in class. The overview at the beginning of the lesson briefly sums up the standard narrative. Students should be made aware that scholarly revision of the standard interpretation is well underway. Over the past decade, historians have published many books and articles that convey a more complex and nuanced description of how and why the post-war struggle for black freedom unfolded. Indicative of the shifting views is the title “black freedom movement” which is increasingly used instead of “civil rights movement.” Many historians of the period believe that the term civil rights is not broad enough to encompass the multiple goals and varying strategies of black activists. This renaming of the post-war African American struggle might be an interesting point for class discussion and a good introduction to this assignment.

If instructors cannot allocate class time to have students break down into small groups and work together to curate and present a museum exhibit, then students could work on this portion of the assignment individually, as homework. An alternative to the presentation model is to have students rewrite their textbook section on the civil rights movement (4 to 5 pages), taking into account and referencing the primary source documents they have examined.

The goal of this assignment is to have students develop a more multidimensional and layered, rather than linear, view of the post war struggle for black freedom. Students will come away with a sense of the varying actors engaged in the struggle for black freedom, including urban and rural folks, youth, women, people North and South, radicals, nationalists, militants, feminists, integrationists, and socialists. They will hear the different voices and the competing strategies that sometimes worked in concert with one another, sometimes in opposition. In addition to familiarizing students with the post-war African American struggle for freedom, this exercise will engage them with changing historical interpretation, as well as encourage them to develop their own analysis using primary source material.