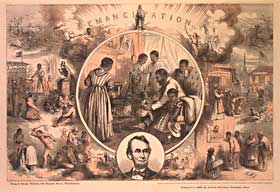 The end of the Civil War and the abolition of slavery raised complicated issues and dilemmas for Americans during the Reconstruction era (1865-1877). After the Confederacy was defeated, the southern states were devastated physically and economically, their political infrastructures were no longer legitimate, and millions of slaves were now legally free. If the South was to be transformed into a free labor economy, and if the southern states were to be readmitted to the union, a "reconstruction" of the South was necessary. But reconstructing the South, as Lincoln once said, was "fraught with great difficulty." What would happen to the Confederates who had seceded from the Union and brought on the Civil War? Would they be punished? If so, how so? What role, if any, would former Confederates now play in the southern states? What about the millions of people who had been enslaved? Would they be given rights? What kind of rights? How would former slaves now earn a living in a free-labor economy? Would they be granted land? Would they now have access to educational institutions? And how would white southerners, who had fought long and hard to maintain the states-rights doctrine that kept slavery alive, be kept in line? Once former slaves were granted rights under the 13th, 14th and 15th amendments to the Constitution, would (or could) the federal government enforce those rights in the southern states? These questions were played out in the political debates and partisan battles that occurred at the federal and state levels of government. In another sense, they were also played out in the daily lives and experiences of newly-freed people.

This exercise focuses on the meaning and reality of emancipation for African Americans. How did life change for ex-slaves in the South during the Reconstruction era? What did emancipation mean to former slaves in terms of their hopes and expectations? What did emancipation mean in terms of the realities of their lives after the Civil War? Finally, if Reconstruction in some sense failed them, why? Was a greater degree of change possible given the players involved and the circumstances?

Before you start this assignment, be sure you understand the key events and issues of Reconstruction. Read the chapter on Reconstruction in your textbook to get an overview of the period. Be sure you know the meaning and significance of terms such as Radical Republicans, the Freedmen's Bureau, the Black Codes, "forty acres and a mule," sharecropping, Black Reconstruction, the 13th, 14th and 15th amendments, the Civil Rights Acts, Andrew Johnson, Charles Sumner, Frederick Douglass, the Ku Klux Klan, the Redeemers, and the Compromise of 1877. (Tip: it might also be helpful to review this Visual Timeline of Reconstruction to highlight the major events and developments of the era.)

Working in groups, examine with your class-partners one of the five Thomas Nast illustrations below. Thomas Nast was an illustrator for the popular magazine Harper's Weekly and a Radical Republican.

Step One: Voices of Former Slaves

Below you find several selected interviews with former slaves, the first three of which were conducted by the Federal Writer's Project in the late 1930s (popularly known as the "WPA Slave Narratives"). These stories allow us to briefly revisit slavery so that we may fully appreciate the meaning of freedom. Here you find ex-slaves' personal recollections of life under slavery in the Old South, as well as some memories of the Civil War, emancipation, and life in the Reconstruction years. Remember, these ex-slaves were very old by the time they were interviewed in the 1930s and 1940s, and their dialect was "reproduced" by the interviewers in the written transcriptions (see Notes on the Language of the Narratives). So their stories can be a little tricky to follow at times.

Examine all of these sources below, including Jourdan Anderson's letter to his former master. As you do, take notes while considering the following questions wherever they may apply. Post three separate answers to each of the following questions on the Discussion Board. Remember to read the student- postings that came in before you, and respond to what other students have said wherever you can.

Each of the primary sources below reflect the political debate and legal issues surrounding Reconstruction. Examine these sources and take notes while considering the following questions wherever they may apply. Post your answers on the Discussion Board.

Assume you live in a southern state (chose a state and create an identity for yourself) and the year is 1877. Reconstruction is ending. Some commentators and politicians are proclaiming that the work of Reconstruction is done. The South now has a free-labor economy, the 13th, 14th and 15th amendments have given former slaves new rights, and it is time to move on, they say.

You have been given the task of writing an editorial for your local newspaper assessing Reconstruction--that is, what it has accomplished or failed to accomplish for African-Americans in the southern states. Newly-freed people had hoped to be emancipated--legally, politically, economically and socially. To what extent, in your opinion, had they become so in the Reconstruction years?

In your editorial, be sure to consider the following issues:

**Important Note: You must use specific examples from these primary sources and be as factual and informative as possible. Do not simply take on the voice of a windy moralizer. Rather, demonstrate that you have closely examined these sources and that you understand the key issues (legal, economic, political). Use evidence from the sources you have examined to make your points.

Should you wish to read more about the era, or clarify some issues you are unsure about, here are some helpful and informative websites on this era that you may consult.

Exhibition Review: Go to the website African American Odyssey: A Quest for Full Citizenship, and under "exhibit sections" click the link to "Reconstruction." Read through the very short history of the Reconstruction era and then look at the images (click for enlargement or elaboration). Be sure to look at BOTH Parts I and II. Take notes on the following questions.

This exercise could be done 1) in the form of a BB posting, 2) as an in-class group assignment with or without a writing component, or 3) as an essay.

There are so many great primary sources relating to Reconstruction that I had to eliminate here in order to make this assignment more manageable. We agreed to emphasize the WPA narratives because they give the students such an unforgettable experience (especially the audio recording of Fountain Hughes). These narratives are rather challenging to "teach" in any formal sense and instructors may find that they must provide more than the usual help in guiding students through them. With the goal of exposing students to these sources without bogging them down with too much instructor-commentary (all too often, I think, we tend to give excessive amounts of instructions on these assignments, which in the end turn the students off), I have sacrificed more specific questions, notations, and background for each source. I assume that instructors will, at their discretion, fill-in some of the blanks wherever they see fit.

Any of these exercises could be modified to fit an instructor's needs. For example, the opening warm-up exercise could be given as a take-home BB posting assignment (though I find that analysis of illustrations works better when students are in groups, where they can collectively brainstorm on interpretation). Also, the essay/editorial assignment's questions could be turned into a shorter Blackboard Posting assignment. (Given that Reconstruction is often the first topic of the semester in the second half of a US History survey sequence, some instructors could find it problematic to give an essay assignment so soon in the semester.)